If you are at all familiar with ‘The Pilgrim’s Progress’ you might have guessed at the origin of the name of this blog. Now although I have nothing ‘against’ gates, they just have never really featured in my life. As a child, the only gates I seemed to encounter where the gates on farm roads. Those were both high in entertainment and frustration level. I think age probably determined how you felt about them! That little scene in ‘The gods must be crazy’ movie comes to mind. You know the one where he is trying to get through the gate with a jeep that has no brakes and cannot be turned off, as it will never start again? I think Marius Weyers did such a good job in that scene. Of course it is based on a similar scene that Jamie Uys did a few decades earlier in one of his old black and white Afrikaans films. I don’t remember the name of the movie, but I do remember the scene, and I wish I could get a hold of those old movies…. BUT! I’m digressing. Well somewhat.

I was going to tell you about some gates we found in this area. Carol told me about this beautiful gate here close by. I expected it to be pretty, but I was not prepared for what I found. This is not pretty, this is a work of art.

Here is the one side. Notice the colours of the rocks behind the ironwork?

…and a close-up of one of the roses. All I can say is ‘wow’…and how long did it take to make it?

And then there is this other one, which is a bit further away. We took pictures of it when we came back from the mountains. (we went up there for the day, on Andrzej’s birthday)

This is not nearly as pretty as the roses, but it is an amazing piece of work nevertheless.

…and the main gate a little closer

Take a look at the leaves… 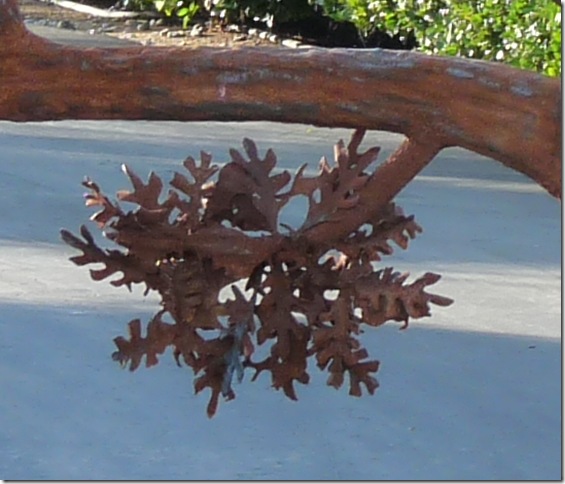 I’d like to know if there are more gates like this around here. It certainly seems possible! If ever I find one, I’ll be sure to show you!